Skip to content
These are some of the tools I use for composing music in general, as well as for composing film music and film scores, including composing software using high quality actual sampled instruments (real musicians play real instruments that are then recorded every possible way so that the composer has real instrument played notes to compose with). MIDI keyboards, MIDI mixing sound boards, monitoring speakers, pro headphones and a digital audio workstation (I use Reaper). 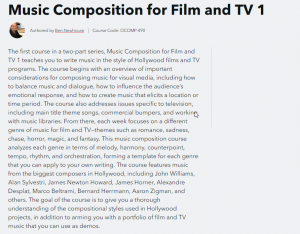 I am a music composer currently based in Duluth, Minnesota USA, part of the Arrowhead Region of northern Minnesota. I am always busy composing in a variety of music genres. Film music is a my favorite type of music, so if the right project comes my way I can score film music for a filmmaker anywhere in the world, remotely.  I have a composing studio and an amazing collection of music instrument (‘sample’) libraries to orchestrate composed music using high quality real instrument sounds. I can be contacted using my contact form on this site. I pursue a variet of art forms including music composing, oil painting, drawing, and photography.
Hello. I am a composer based in Duluth, Minnesota. I compose music including media and film music compositions. Here are some of my original compositions as a mix of genres. As for film music composing, my demo Reel shows scored cues of film scenes (password on request).